Late Pix from the Ides of March party

A couple of pix from the Beware the Ides of March Party. The pix are not as revealing as my costume was. 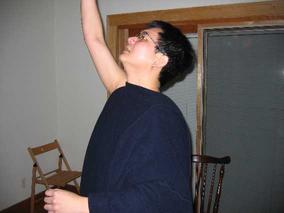 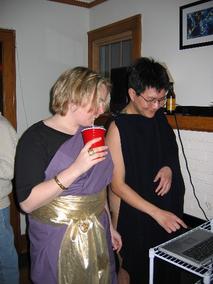 Well, my hard drive died the other night: it was making a strange repeated click-clack noise. I decided then (not much, much earlier because I have been lazy) that I should clone the drive to my external backup drive. The cloning began just fine, so I left for a few hours to read at a café. When I came back, it was stuck on copying the System folder, sitting there making that same click-clack noise repeatedly.

Well, I decided to wipe the disk, and fill it with zeroes. I expected to hear that odd sound, but no, it went smoothly. Here, I was rather hoping the cloning managed to get my home directory. I also had a Retrospect backup, but it was a few days since I had run it. On booting, after a fresh Panther installation, there were those same noises. But they stopped, and I had been running the system like that for over a day. It seemed to behave fine. I assume that having only 3GB of data on the 37GB disk, instead of 34GB, allowed it enough space to go around whatever hardware error there is.

And just now, I managed to pull all my data from the clone (thanks, CCC) and stick it in the new Panther installation. No problems now, except for the weird ecto bug that was cured when I was running the minimal system. *sigh* Well, at least all my work-related stuff is back.

So, I definitely need a new HD. I am eyeing an 80GB Hitachi Travelstar.

Well, I spent hours yesterday getting OpenACS running on my PowerBook. It’s been a few years since I played with ACS (from ArsDigita, another victim of the .com bust), and I was impressed with it when I tried it out. So, it is running, with PostgreSQL via the unstable tree of Fink. But, there seem to be errors of one sort of another that I haven’t debugged. I also installed .LRN, but was not able to get it to work; looks like an OpenSSL problem.

I was hoping to see blogging software for OpenACS, and there is a blogging module, but it’s pretty thin on features and customizability. (I’m comparing it to MovableType and TypePad, of course.) But, it looks promising.

OpenACS is fast. I mean fast. On my PowerBook, I was surprised by response times for the dynamically generated web pages. Granted, the database is pretty much empty, and I don’t have network latency connecting to localhost, but I was running a compile while testing the setup. We’ll see how it goes. I installed it because I wanted to see if I couldn’t write a Technorati module for it.

In other news, I found an old friend from Cornell via O’Reilly’s blogs. He quit physics and went into IT and DB administration. And I am now officially spending too much time in #joiito.

So, I took a sizeable portion of my book collection down to one of the local bookdealers’ because I am in rather dire financial straits at the moment. In the pile were some classic philosophy books, and nice hardcover biographies of mathematicians and physicists. One of them happened to be this book by Bruce Aune, Knowledge of the External World. It’s a good review of epistemology, and philosophy of science. Note that the price is quite high, about $60. Guess what I got for my stack of books. $18.20. That’s only about 4 times more than what I got for bringing in about 10 books the other day: $4 for a complete set of Chronicles of Thomas Covenant (Stephen Donaldson) in paperback, and a few others, in so-so condition. But that was with a different buyer.

As may well be expected, I am very pissed off. I am sure the books would have been worth much more if I had listed them on half.com, even if I had only sold one or two of them, as I have my math and physics books. AAAaarrrrrgggghhhhh!!!

Not such a surprise 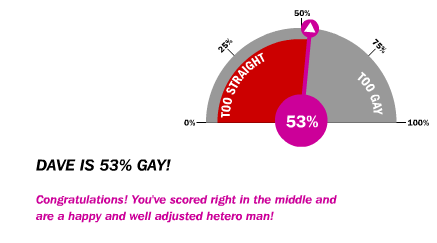 A Sample of Chinese-Malaysian Dialect

I seem to have lost my dialect (pidgin), and can’t reproduce it on demand, as some friends here have asked. So, here’s a post on a Chinese-Malaysian doctor’s blog that will give you an idea. The pitch and volume modulations are much wider than in most American dialects that I’ve heard.

Well, I underdressed (as is usual for me) for Soraya’s party last night, and Christa managed to grab a pic:

I found this journal via a comment the author made to a posting about ATMs on SlashDot. Enjoyable reading, and a refreshingly different style from most online bloggers.

I am Gustav Klimt

According to this, my inner artist is Klimt. Ug. I am not a big fan of his. I mean, his work isn’t bad; it’s just that there are other artists I prefer. Maybe that’s why I’m no artist.

Whether incurable romantic or caring optimist, your style is undeniably Klimtian. Like all romantics, you tend to think with your heart. And why not? Great things often come with a healthy dose of passion attached. When it comes to matters that matter whether love, or injustice, or freedom you’re rarely one to follow the crowd. In fact, you possess the rare gift of courage, along with the self-confidence to stand up for your convictions. We’d guess you’ve swum against the current once or twice before. And where something you care about is concerned, we’ve no doubt you’d do it again.

Well, I spoke too soon. I was able to get unencrypted smtp to work, but no dice on smtps. Grr. Back to the manuals.