I just arrived in Orlando, FL, for a conference. Anyway, the net connection in the hotel sucks. First off, they charge $13 per day. Worse than that, their dumb proxy keeps kicking me offline every 2 minutes or so. So, I have to go to their portal webpage, log off (yes, I am disconnected even though it registers me as being logged in), and then log back on. What crap. And bandwidth sucks, too.

Update: Interestingly, it looks like they have an open wifi access point, though. It hasn’t kicked me off, or refused to route me out.

Thanks to Ted who commented on my Peaches show post: he found a bunch of Peaches videos online, and posted commentary on a NY Times review of a Peaches show. Not to mention his own great review and some great pictures, too. And if you want to see pics from her current tour, there’s the Teaches of Peaches Flickr pool. Apparently, her music is now featured in a Gap TV ad. What I miss from not having TV.

I keep finding stuff via Technorati, like this post pointing to two podcast episodes by AOL featuring interviews with Peaches and live performances by her, plus pictures. Oh, and they interviewed The Eagles of Death Metal, too. “Let’s explain the band name S.A.T.-prep style. Josh Homme and Jesse Hughes are to death metal what Don Henley is to rock ’n’ roll. But Henley probably has a lot more money (and a lot less leather).” 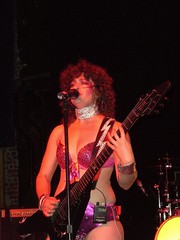 Peaches and Eagles of Death Metal rock the Avalon

The Peaches and Eagles of Death Metal show yesterday rocked!

The Eagles of Death Metal opened the show. I had no idea what to expect from EoDM, but they’re a great rock ’n’ roll band. They don’t play death metal. Straight ahead stuff like from the early 70’s (?) before metal morphed into the hairbands of the 80’s. The lead singer’s very charismatic. He had that whole Mick Jagger body language thing going: my gaydar was going off, but he was super butch, and came on to all the women in the house. Musically, the band was tight, and it looked like they loved playing. Great stuff. And loud, too!

Now, Peaches… So, I was sort of surprised. I don’t think I would have recognized her if I had met her on the street. First thing I noticed is that she’s much more femmy and shorter than I expected. And super cute. The pictures of her on her CDs and her site gave me the impression that she was androgynous in looks, and tall. But she was about 5’4“ I’d say. And she had curves like an average woman. Seriously, I was so dumbstruck by this that I was alternately giggling and having my mouth agape the whole show.

OK, about her show proper. She puts on a great show. She started on the upper level at the back of the house. It took a few measures of music before people realized she was there: I thought we were listening to a recording, at first. While our attention was diverted her band came on stage, and were ready for her when she made her way down. Oh, the band is new. Her shows used to be solo: she would sing, accompanied by her Roland MC-909 MC-505 and occasionally playing guitar. I never saw her perform before last night, and I wish I had seen one of her old solo shows.

She has tons of energy: she and her band, The Germs Herms, kept the beat up the whole way through. She had several costume changes, mostly consisting of stripping off layers to expose the next costume. By the end, she was in just a black bra and knickers. (Plus boots and thigh-highs.) At one point, she rode a bicycle on stage. She walked on the crowd. (I was just a little too far to lend support.) She got EoDM to come down and play backup dancers. The crowd was going wild. There was no dead time, except for a short break of a few minutes. Even then, one of the roadies kept the crowd hyped. One tune would roll into another, and she changed costumes while singing.

It was a really young house (18+), but there were a few geezers like me. And I recognized a few faces from my JP neighborhood.

I don’t have her new CD, yet, but I need to get it. About half the songs they played were from the new disc, and they were good. They’re a little less minimal (electroclash) than her first two discs, but still maintained a spare atmosphere of vocals over beats. That’s one of the qualities that drew me to her music: it’s a bit like Prince in the early days, where he might have just guitar and drum machine under vocals, with lots of space. Oh, and not to mention the raunchy lyrics.

I can’t believe I haven’t mentioned Pete Miser, yet. He’s a rapper. He’s got flow. Listen to “Got That” and “Scent of a Robot” from his downloads section. And don’t miss the video for “Scent of a Robot”. And here’s an interview.

While I’m on hip hop, here’s an odd clip of DJ Q-bert scratching while wearing a gas mask (which looks like a mouse mask):

I just found out about Honey, Where You Been So Long? an MP3 blog of pre-war blues music. Fantastic stuff. (I started listening to blues in high school, though nothing like this.)

Listening to Hell Ain’t Nothing But A Mile and A Quarter from the album “Piano Blues” by St. Louis Red Mike

Looks like Into the Freylakh, a great klezmer band led by my friend Bryan Pardo with whom I used to play in Weave, has also recorded Misirlou. (I’ve mentioned that song before: here and here.) It appears on their second album, The Shape of Klez to Come. Unfortunately, CD Baby is out. I have no idea why I never bought the disc when I was in Ann Arbor and going to their gigs. Ah, well. I just bought a copy of their first CD.

In case you haven’t noticed, I have a thing for klezmer. I think I first started to listen to it in ‘99 or so. I remember downloading klezmer tracks off some site where bands could upload MP3s (a bit like Myspace, but without the soical networking aspect).

How to solve sudoku puzzles without thinking

Here’s a nice HOWTO that describes notation to help you solve sudoku. As a side effect, it also allows you to step away from the puzzle and come back to it later.

Daughters of the Vicar, by D.H. Lawrence

I mentioned this story in my sidebar reading list. Well, you can read it here.

Busy making plots for the American Association of Physicists in Medicine annual conference at the end of the month. Some are pretty. Not as pretty as this old plot, but the stuff I learnt making that one helped me make this. I have a script that cranks out about 2 dozen plots semi-automatically. Listening to “100 por Carlos Gardel” (Carlos Gardel), which my roomie brought home from her trip to Buenos Aires 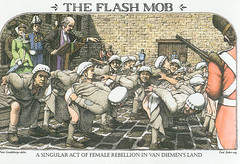 Speaks for itself, really. But more details here.