The Unicorn, the Gorgon, and the Manticore

“The Unicorn, the Gorgon, and the Manticore: a madrigal opera in one act” is a lovely work by Gian Carlo Menotti, probably best known for the Christmas classic “Amahl and the Night Visitors”. It’s for chamber choir (with some solo parts), small instrumental ensemble, and dancers.

I performed this while with the Oregon State Choir at Oregon State U. (It looks like that has morphed into the Chamber Choir.) Since that performance, I have been looking on and off for a recording. I finally found one last weekend, performed by the Carolina Chamber Choir (T. Koch, conductor).

Oh, and this month marks 4 years on TypePad.

I just got a copy of Stormy Weather (since I got a 30% discount coupon in email), featuring Lena Horne, Bill ‘Bojangles’ Robinson, Cab Calloway, and other huge names. Am watching it now: opening scene is Bojangles drilling a time step with a bunch of kids. :D

This clip is not from this movie, but was a deleted scene from “Café Metropole”:

Well, after all that tap talk, here is a sequence from Joey Bishop’s old show, where he challenges Sammy Davis, Jr. to a tap-off. Joey’s brother Maury and Sammy’s dad get in on the act, too.

My tap instructor, Julia Boynton, is organizing the first tap festival in Boston. It’s called Beantown Tapfest, and will be held Aug 17–19, 2007. I’m pretty excited about it, and to take classes from the visiting performers.

Last week, I made a daytrip down to New York, on one of the Chinatown buses, just to see the Tap Internationals performance. Julia had recommended it just because tap dancers abroad tend to have a different take on tap dance. It was great. Here’s a brief rundown of the performers I recall.

Alexander Ivashkevich and Anton Merkulov are a duo (Russian, and Estonian). Very cool, clean, precise. Great use of space. They were both in dark suits, one with a red-lined jacket which gave a flash of color on certain moves.

Christiane Matallo from Brazil gave a tribute to Carmen Miranda, complete with crazy outfit and fruit hat. What was impressive was that she was dancing in 6-inch heels, and doing pullbacks and wings. Oh, not to mention she played sax while dancing.

Chikako Iwahori from Japan was accompanied by composer/pianist Brian Marsella (who reminded me of Bruno from the movie and TV series “Fame”). The distinctive aspect of this piece was that it was ‘contemporary’ – the music had uncommon tonality, and unusual and shifting meter. What I liked about this piece, too, was that Chikako and Brian were more like partners than dancer/accompanist. The inter-relation between the dance and the music was very close, particularly during a trade-fours section.

Rhythm in Shoes (Gina Burgei, Josh Fossitt, Emma Leahy-Good, Sharon Leahy) with multi-instrumentalists (banjo, guitar, flute, etc) Ben Cooper and Rick Good did a great fusion of traditional clogging and rhythm tap. The music was bluegrass. What I liked is that the dancers also incorporated square-dance or contradance moves (which I remembered from going to some contradances years ago) with the clogging and tap rhythms. Clogging and tap tend to focus a lot on the rhythmic footwork, and not use space very much. So, it was great to see folkdance elements (patterns, partnering, lines) coupled with the rhythm.

Max Pollak’s Rumba Tap, with Chikako Iwahori, Max Pollak and Lynn Schwab, with saxophonists Paul Carlon, Norbert Stachel, and Gottfried Stoger did an Afro-Cuban influenced piece. Max and Chikako had done an earlier piece to music by Tito Puente. I’m a sucker for Latin music. I love the rhythms and the syncopation. And I was very glad to hear the Afro-Cuban rhythms expressed in tap. Something I need to try for myself, I think.

The final performer was Kazu Kumagai, a brilliant dancer. Super fast, clean sound, expressive body, decent use of space, great rapport with the audience and the band. I, and I think most of the rest of the audience, had my jaw agape practically through his whole piece. He really seemed to be enjoying himself, and he smiled and winked at the audience. He charmed everyone, and dazzled them with technique. He received a standing ovation.

And that was it. I went back downtown. Stumbled across this touristy, gimmicky haunted house cum bar called the Jekyll and Hyde Club. They had animatronics downstairs, which startled me a bit when the main dining room came alive. I tend to avoid touristy places, but I went in because the sign said something about a place for mad scientists and adventurers. Being a scientist (the “mad” bit may be arguable), I had to go in. Wasn’t too bad a place, actually. It wasn’t a very busy night, though the few groups of tourists who made it to the bar were a bit obnoxious. Didn’t have time to finish my last drink before I found a cab to take me back down to the bus. For some reason, a large section of Interstate 95 was closed, forcing the bus to take a very slow detour. We got back to Boston about 2.5 hours late, at 4:30am.

I only took a few pix. The rest of the time, I spent in the Strand, or walking around the lower East Side. Click on the pic below to see more. 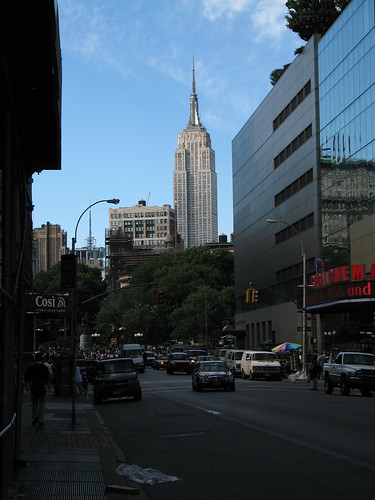 I use GMail and want to have mailto: links be handled by GMail’s web interface, rather than Mail.app. Jack Dorsey wrote a simple handler program called GMailto. It was nice: set it as the default email application, and any email links clicked would call up GMail’s new message composing page.

Then, it stopped working. Thankfully, source code is available, and I was able to make the little mods to get it working again. Here’s the hacked source. You’ll need to compile it yourself with XCode. 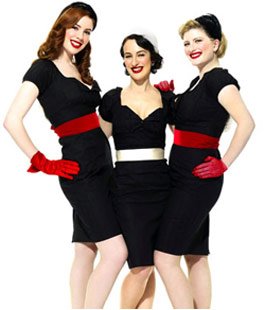 My new favorite group: The Puppini Sisters. They do Andrews Sisters-style arrangements of pop songs (a lot from the 80’s), in addition to the standard 1930s and ’40s jazz material the Andrews Sisters covered. I heard their CD “Betcha Bottom Dollar” being played at a Barnes and Noble store, and I had to get it when I recognized them covering Kate Bush’s Wuthering Heights.

Listen to their cover of The Smiths’ Panic (3MB MP3). Here’s a video of them doing Boogie Woogie Bugle Boy: