I have the dubious distinction of being an essential worker, due to being an IT person. Anyway, once work allowed essential workers back on site in April, I started cycling to avoid public transit. The bike is an 8-year old steel-frame Windsor Kensington from BikesDirect.com: 8-speed Shimano Nexus internal gear hub, set up for “utility” cycling around town. I upgraded the brakes to Tektro R559 with FL750 levers, to retain a vintage-ish look; along with it, the brake cables were upgraded to Jagwyre Road Elite Sealed. That was a huge improvement: no more sponginess, and I could actually stop in the rain (with the normal precautions). I also upgraded the shifter cable to Jagwyre Road Elite Sealed: see this old post. And upgraded the rack, too, since the original one worked loose, and I wasn't too satisfied with its sturdiness. Not to mention the Pletscher Twin center kickstand, which was one of the first changes I made. 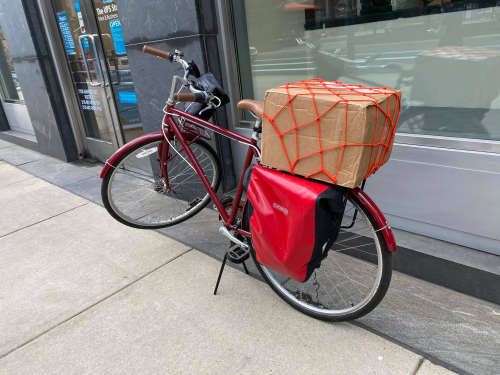 Anyway, my commute is only 4 miles. But I was still noticing the bike was pretty heavy. Fortunately, I can store it on the ground floor, currently, so I don’t have to schlep it up two floors to my apartment. And there were other minor annoyances, like a cheap steel chainring which rusted (it had been painted), some unexplained rattling in the Nexus hub (which did resolve itself after a couple of weeks of normal riding).

More importantly, I had an idea of my ideal commuter bike. But pricing the parts put it way over my budget, not to mention my skill set in building a bike. Pre-built ones were also pretty pricy. I wanted an internal gear hub (without needing a massive gear range), belt drive, hydraulic disc brakes, and maybe a dynamo hub wheel.

Finally, after some months of cursory browsing, I found the Priority Continuum Onyx. It checked all the boxes, plus it added an aluminum frame, and a Nuvinci Enviolo (manual) continuously variable internal “gear” hub. Reviews from regular bike commuters on YouTube and in Reddit were favorable: these were people who put many more miles per day on their bikes, and rode in much rougher weather than I would. All those factors fell in place at the right time, and I bought one. I paid the nice people at Firth & Wilson Transport Cycles to assemble it for me.

The first thing I switched out was the seat/saddle: put in a Fabric Cell Radius Elite.

I took it for a 6-mile ride, and it’s pretty nice. Light compared to the old bike. Larger gear range: much faster on the high end. No sticking on the low end, which is an issue on my Shimano Nexus. Brakes are decent: honestly they did not feel much better than the Tektro rim brakes on my old bike. I expect they will be much better in wet weather. The ones on the Priority are low-end Tektro hydraulic disc brakes. It felt pretty nimble, and lively. The belt drive was very quiet. The Nuvinci continuously variable hub was nice: shift while stopped, find the “in-between gear ratios”.

Of course, I have some gripes: the flat-straight handlebars are pretty uncomfortable for me. I find myself pitched further forward than I like, and the grips don’t sit in my palms well: my hands were tingling even after the 20-minute ride. The grips are not very comfortable, either: they are pretty hard, and just felt like two hard slightly tacky cylinders in my hands.

The Fabric Cell saddle was kind of disappointing: it was a lot harsher than I expected, despite the reviews I read or watched. (I think those were comparing against normal road racing saddles.) I’ll give it some more time, and maybe re-adjust the positioning.

Future upgrades: I definitely need a rear rack. Topeak make the same rack I have on my old bike, but which accomodates disc brakes. I use the bike for shopping errands, and picking up or dropping off packages. Definitely need more comfortable handlebars, something with a bit of a sweep back. Almost definitely more comfortable grips. Maybe a QuadLock mount for my phone.

I recently changed the shifter cable on my bicycle, which has a Shimano 8-speed Alfine internal gear hub, and a twist shifter (Nexus Revo-Shift). Shimano provides PDFs of the dealer manuals, with details on how to install, and uninstall. I thought I would document it for myself, with pictures.

It’s not too complex. I actually did it first without looking at the manuals. It is actually pretty simple. The twist shift mechanism is straightforward, and you can figure it out after opening it up: there is only one screw to remove to get into it.

The first thing to do is to remove the cable at the hub end. You put the shifter into gear 1, release tension on the cable by inserting a small (#2) Allen key into a hole at the hub and rotating the pulley mechanism, then pull the cable fixing bolt off its notch. You may have to use a pair of pliers. Here is the diagram from the dealer manual (DM-SG0003-03-ENG.pdf). 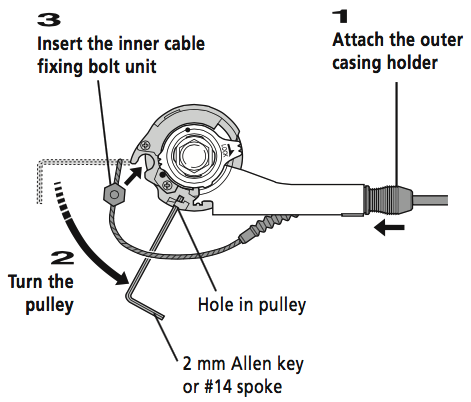 Remove the cable fixing bolt, and put it aside.

Removing the shifter itself is much easier. First, get it off the handle bar. Then, peel back the rubber grip and pull it off. Remove the small screw holding on the cover plate, and take the plate off. Remove the adjustment bolt. Be careful because it’s in three pieces, including a small spring that may fly out or roll away. 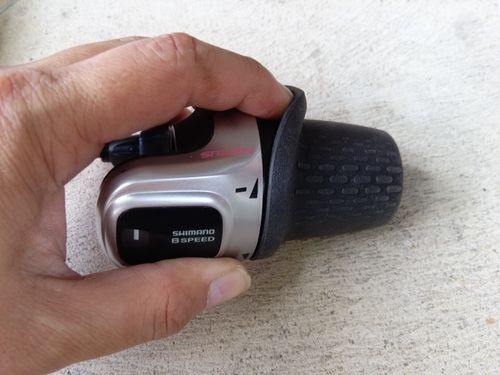 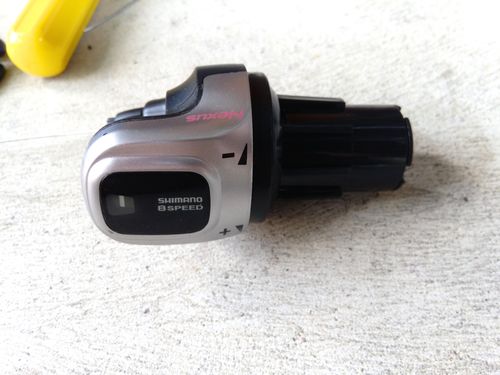 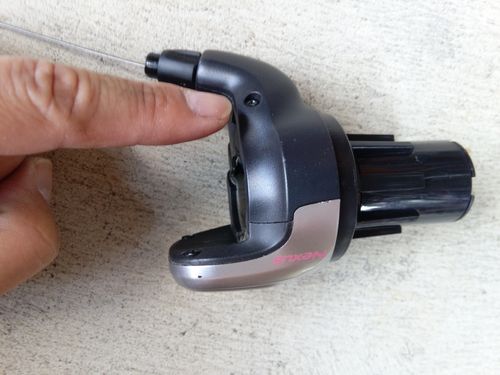 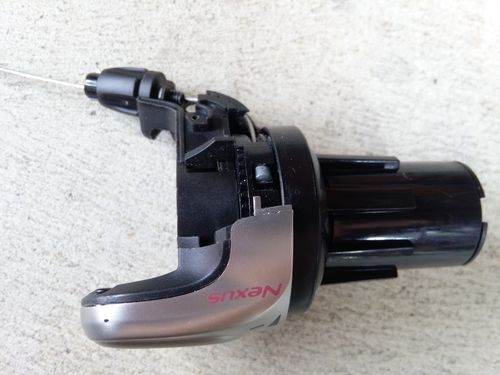 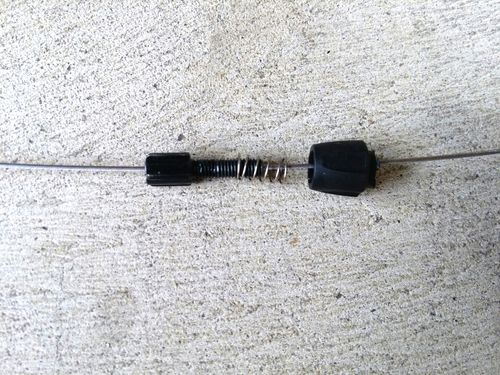 To actually remove the cable, I found that it helps to put a right-angle crimp in it near the “nub”. That angles the nub out of the housing allowing you to pull the cable out. 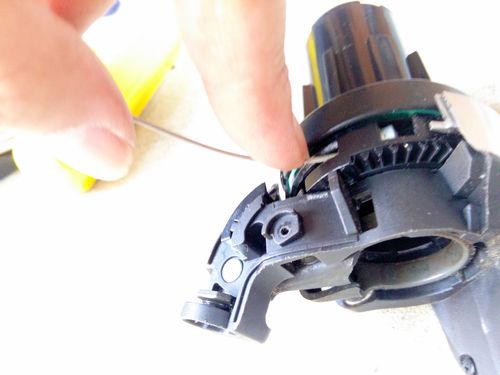 Re-installing is straightforward once you have the new cable and housing in. Follow the manual for torque specs, and detailed adjustment instructions. For adjustment, put the shifter in gear 4, and look at the top of the hub. You should see two yellow line segments. Screw the adjuster to align the segments: they should overlap by more than ⅔ of the width of the lines. 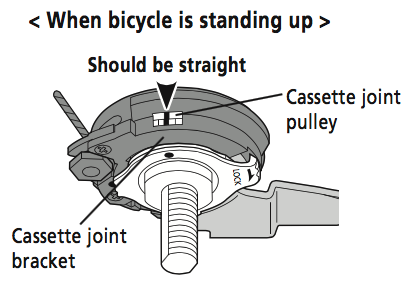 A note about the cable. I got Jagwire Road Elite Sealed Shift cable kit. The week before I had replaced my entire brake system and used the Jagwire Road Elite Sealed Brake cables, and found them to work really well. Very smooth and firm: no hint of sponginess. The Elite Sealed system has a full-length internal plastic (Teflon?) liner, which is pre-lubricated. The cable is “polymer coated” (I think it’s Teflon). This keeps grit and moisture out. The housing is compressionless.

In any case, this shift cable does not seem to work well with the Revo-Shift and the Alfine hub. During a 10 minute test ride over relatively flat ground, I found it tended to stick between 4 and 5, especially shifting down: that is when the tension is being reduced, and the internal hub shifts from a high “register” to low. The hub would be hung up on 5 even when I had shifted down to 1.

All in all, I learnt a lot about my bike and the internal hub system doing this. It was a couple of hours well spent. I will have to put in a different shifter cable, but it will go easier.

UPDATE: The problem was with adjustment. I did not put enough tension on the cable to start with. Adjusting the base tension got rid of the "no shift" issue.