UPDATE: Bluetooth fixed itself. What I did: booted into Windows (installed on a separate SSD), used Windows to connect to the speaker, quit Windows to boot into Hackintosh, and Bluetooth works again. Quick way to see that Bluetooth is OK is that System Information on the Bluetooth device should show a non-trivial address. If it were broken, the address would be 00-00-00-00-00-00. 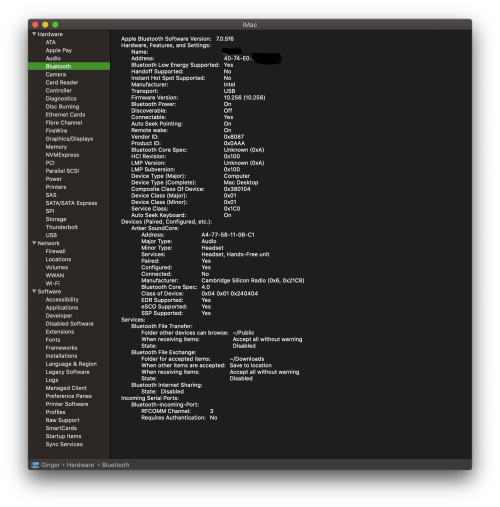 tl;dr This did NOT fix my Bluetooth issue. I had also cleared the CMOS and re-set all the BIOS settings before I went through all of this. So, this may be of some use as a summary of USB port mapping in OpenCore, but of no use at all for fixing Bluetooth issues.

Suspicion: the breakage is due to the macOS 15 USB port limit. (Additional USB hubs get their own 15-port limit.)

The script allows you to disable all SSxx ports and all HSxx ports. Then, manually enable a specific set of HSxx ports. From this post at tonymacx86, someone has listed the USB ports for this motherboard: back panel, and internal headers. I have verified this is correct, for the ports that I can use. I have no USB Type-C devices, so I cannot check the two USB Type-C ports on the rear panel. 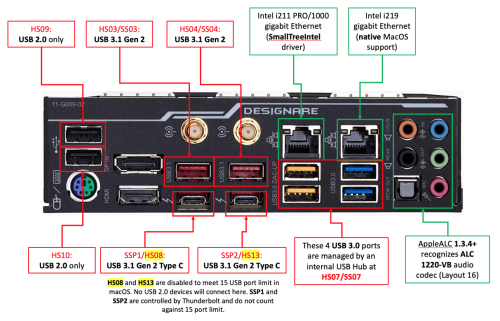 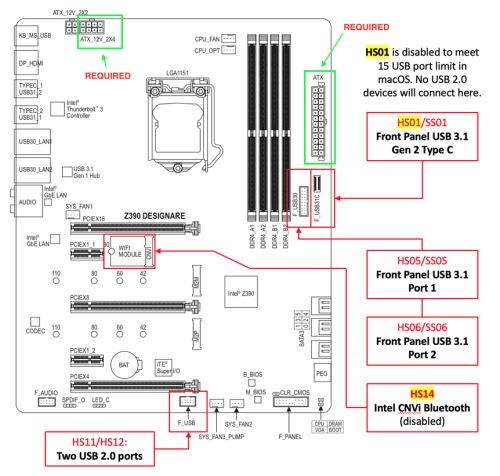 The case I am using has no front-panel USB Type-C ports, so I can leave HS01 disabled. I do not currently have any USB 3.1 Gen 2 Type C devices, but I am planning to get at least one: I will enable both HS08 and HS13. I will leave the internal Bluetooth (HS14) enabled. There is no HS02 shown in either diagram, and none of the ports I could test were HS02: so, disable that. There was no USR1, either, but the USBMap documentation does not say anything about enabling or disabling USR* ports, so leave that enabled.

The boot-args option is:

Back at the main menu of USBMap, pick “S. Build SSDT-UIAC”, which will generate two .aml files:

Copy those to your EFI/OC/ACPI folder, edit your config.plist to add them to the ACPI section, and reboot.

I wanted to have Handoff on my Hackintosh. That requires WiFi.

The built-in WiFi on the Gigabyte Z390 Designare motherboard does not work with macOS. But Dortania, the people who work on OpenCore, have a list of recommended WiFi devices. I got an ASUS PCE-AC68 AC1900 Dual-Band Wireless PCI-E Adapter. And it just worked. I did not have to add more kexts or munge my config.plist.

Another point for OpenCore.

However, Handoff does not work. It seems like I need a Bluetooth adapter with a particular chipset. The ones that are pretty certain to work are ripped out of actual Macs: they use the Broadcom BCM94360CS2 or BCM94360CS (one person had better luck with this) chipset, and combine WiFi with Bluetooth. There are also generic adapters: search eBay for that product string. These are M.2 form factor. Since I wanted the second M.2 slot on my motherboard for a Windows installation, I could not go this route.

Migrating from Aperture to Lightroom Classic

I built a new Hackintosh, and am now running macOS Catalina (10.15). Since Catalina only runs 64-bit applications, I am finally forced to migrate all my photos from Aperture to Lightroom Classic.

tl;dr Make Aperture store its masters as “referenced”. Split the library into smaller ones, no more than about 10,000 masters per library. (A 27,000-master library took > 24 hours to import.) Import into Lightroom, keeping Aperture masters in place, and copying Aperture-edited previews into the masters’ location to allow automatic stacking.

The Aperture import plug-in that comes with Lightroom Classic is not great. If you have a very large library, it can get very slow. No one who has very large libraries seems to have waited. My library is about 700 GB, with about 560 projects and 81,500 images. I kept the library “managed” i.e. Aperture copied everything into its library package. I tried to import the full Aperture library into Lightroom Classic. After 5 full days (24 hours per day) of running, the import into Lightroom seemed to stall at 50%. From the start of the process, every additional percentage point seem to take longer and longer. (Felt like an N² algorithm or worse.) Others have had the same experience (Adobe support community forum post).

Without resorting to a manual import (aka “the Old Method”), as the person who posted that issue in the Adobe forum did, I figured I would try the latest suggestion posted there, i.e. to break up the single original library into multiple smaller libraries. That seems to be working pretty well.

To export in Aperture: File ▶ Export ▶ Items as New Library… Then, in the options:

For this to work, your Aperture masters folder must have the same absolute path on the old computer and the new computer. My old computer’s Aperture masters (originals) folder was at: /Volumes/Homes/Users/myname/Pictures/Masters
On my new computer, I needed to make sure that my home folder was on a separate volume, such that it ended up with the same absolute path /Volumes/Homes/Users/myname/Pictures/Masters. I had tried one iteration, where my new home folder was in a slightly different location /Volumes/Homes/myname and that did not work because Lightroom Classic complained that the folder /Volumes/Homes/Users/myname/Pictures/Masters was missing. It is not the fault of Lightroom Classic, since the absolute paths are encoded in the exported Aperture libraries.
You also want to make sure the previews are copied into the exported library. Otherwise, Lightroom Classic would not have access to those (edited) previews.
To import into Lightroom Classic: File ▶ Plug-in Extras ▶ Import from Aperture Library…. There is an Aperture Import Info… menu selection which gives some info about the import process. A window will pop up, showing four sections.
The first section is “Previews from Aperture”. There is only one option, “For images which have been adjusted in Aperture, import full size previews from the Aperture library (if they are available and up-to-date)”: check that ON.
The last one, is “Files referenced in Aperture”. Here, check ON “Leave referenced files in your Aperture library in their current location”. If you have checked on “import previews”, a second option should be available: “For referenced images left in their original location, place version previews in the same folder as the master image to allow for automatic stacking”. Check this ON, too.
In short: import previews ON, leave referenced files in current location ON, place version previews in same folder as masters ON. Really, ALL options are checked ON.

Click “OK”. As a check, you should see that the “Disk space required” value should be small, indicating no additional space for the masters will be used. It should just be the additional space to accomodate the previews.
It will return you to the first window, where you can click “Import” to start the import. How long it takes seems to depend on the number of images in the library. I didn’t time any of the imports, but a few thousand masters with maybe a thousand previews took maybe 2 or 3 hours. Certainly not the multiple days that a naïve import took.

My old Hackintosh was messed up: it mounted the separate drive holding the Home directories in "/Volumes/Homes 1" rather than "/Volumes/Homes". That meant I could not login normally.

But, I was still able to login via ssh. Since macOS is a Unix-ish system, it just drops you in the root directory. From there, do the following:

Credit to this answer at Stack Overflow. Like any *nix, there is a man page.

Well, this sucks: according to Apple, migrating Aperture RAW files to Lightroom Classic does NOT migrate the non-destructive adjustment layer. Which means my 650 GB or so of photos are the unedited versions.

The old Hackintosh is dead. So, I can’t go in and re-export edited JPGs. But even if I could, I wouldn’t do that: who’s got the time?

I now have a new Hackintosh. My old Hackintosh was completed at the end of 2012. And for the last year or so, it has been running really slow. I also managed to kill the GPU slot a few years ago, due to my usual impatience. So, it had been running with the on-board Intel GPU. However, I was still able to play League of Legends on its lowest quality graphics mode, all credit to Riot Games.

This build was rather frustrating: I decided to use OpenCore, as it seemed (last fall) to be the future of Hackintosh. I had all parts in hand last November. I worked on the build a bit at a time over the last few months, but kept running into issues. E.g. fixing the "slide" value for KASLR, random crashes, black screens, etc.

In any case, all the bits and pieces sat around for a few months. I finally installed Windows on its own HDD, and had been running it for a few weeks. Finally decided to take a look at OpenCore, again. I ended up using OpenCore 0.5.9. The documentation had also been tidied up a bit, and it seemed a little easier to follow this time around.

It took me only a couple of days to get everything up and running, stably and consistently.

Additionally, I re-purposed an old 2.5" 500 GB HDD that I had lying around from an old used Mac Mini that I destroyed. (Did I mention that I tend to destroy hardware due to impatience?)

Before I go into some detail about the process, here is a short rundown on what works and what doesn't:

Here is what I did. There is a lot of detail follow in the official guides, so I will just present an outline, and the key hardware-specific things I had to do.

I also found the diagrams in this forum post useful, even though it uses TonyMacx86, since they use the same motherboard.

Late addition based on post-install experience: Do not bother with USB mapping unless you find one or more USB ports that you need are not working. Things just seem to work.

And that was pretty much it. 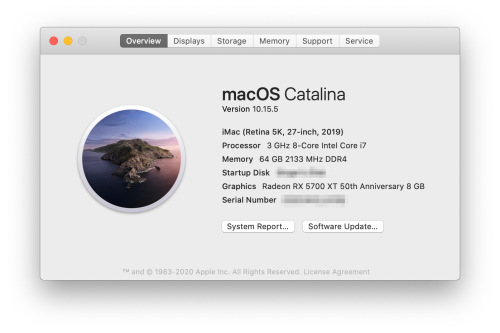 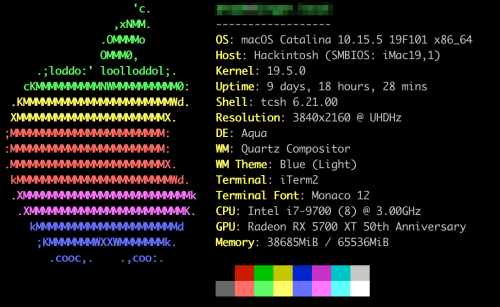 The update to High Sierra was a bit different.

Run the macOS Installer/Updater, targeting the system drive. After a few minutes, the screen will go black in a reboot attempt. Manually press the reset button. Use the firmware boot selection to pick the Installer USB drive as boot drive. At the Clover screen, set the same options/settings as above. Then, select the "Install macOS" boot drive that is on the system HDD (not the USB drive) to boot from.

The installer/updater should come up and continue the upgrade process. It will be a white or light grey screen, with a grey Apple logo, and a progress bar saying "Installing: About X minutes remaining".

This is sort of cute:

How to fix iPhone sync stuck on importing photos

After playing with Aperture and Photos per my previous post, I found that iTunes would get stuck syncing my iPhone: it would stay on the “Importing photos” step for hours (I left it overnight).

The fix is basically outlined in this post on StackExchange, with modification since the post deals with iPhoto.

You can do this on the command line, or in the Finder.

UPDATE: Well, once you restore the old Aperture library, iTunes sees it and allows you to sync the iPhone to it.

When you migrate your existing Aperture library to the new Photos app, it does away with all the Aperture Projects. So, all my old organization was gone.

Luckily, there's a way to recover the old Aperture library. In ~/Pictures, all the migration did was to rename the "Aperture Library.aplibrary" file to "Aperture Library.migratedaplibrary". Just Get Info on the file, and modify the extension. Open Aperture, and see all your old stuff return.

I have not figured out how to get the iPhone to revert to syncing with the Aperture library rather than the Photos library.  😡